The TASC test is not offered anymore. The states that relied on TASC for their High School Equivalency exam have chosen different options.

New York State opted for the GED test, and West Virginia replaced the TASC exam with the HiSET. Earlier in 2021, Indiana already switched to the HiSET. Other states that have had multiple options simply removed the TASC exam.

Students who passed some subjects will be able to transfer their scores to their GED or HiSET accounts.

On this page, we inform you about the states that used the TASC exam for high school equivalency testing.

The TASC test was one of the three nationally available recognized High School Equivalency tests in America besides the GED and HiSET exams.

The exams offer persons that never completed their high school curriculum the opportunity to earn an equivalent degree.

The TASC test was created by the Data Recognition Corporation (DRC). This educational publisher is known for the TABE test (Test Assessing Basic Education).

New York State also used the TASC exam from 2014 through 2021 but discontinued the program and replaced it with the GED exam. As said before, Indiana already changed to the HiSET exam earlier.

The state of New Jersey offered all three available HSE tests (GED®, TASC, and HiSET®) for HSE testing, but not all testing centers administered all three options.

You had to create your account on the TASC/New Jersey portal (https://newjersey.tasctest.com/Default.asp). Then, you could contact a TASC test center near you and schedule your tests. All U.S. GED and HiSET test centers are listed here.

In New Jersey, all available HSE exams must be taken on a computer. In other states, the TASC test was offered both on-paper and on-computer, but In New Jersey, paper-based TASC testing was not possible unless it was approved as an accommodation to qualifying test-takers.

In New Jersey, the TASC exam (all five subtests) was $106, which was slightly cheaper than the GED test. More New Jersey GED information can be found here.

New York State used the TASC exam for its high school equivalency (HSE) program from 2014 through 2021. HSE testing is free in the state but only available to state residents. New York decided to switch to the computer-based GED (General Education Development) in December 2021, and earlier TASC scores can now also be transferred to the GED! 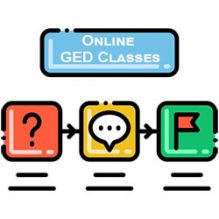 The five TASC (Test Assessing Secondary Completion) subtests were scored on a scale from 300 to 800. On each subtest, the required score was 500. This means that your minimally required total score was 2500. On top of that, you needed to reach at least a score of 2 for your essay. Learn more about the TASC passing score here.

Averaging subject test scores was not possible, so even when your cumulative score was (far) above 2500, you still didn’t pass the TASC exam if one of your subtest scores was under 500!

So the highest possible score on each of the five TASC subtests was 800, or in total 4000, and your maximum essay score was 8.

How is your essay graded?

There were two readers that graded your essay on a scale from 0 to 4. So the highest achievable score on your essay was 8. If the two readers came up with a score within 1 point, their scores were added up, and that was your essay score.

See also this post about how to compose your HiSET essay. So it’s a post about the HiSET exam, which is now used in West Virginia.

If the two readers’ scores were more than 1 point apart, a third reader would come in, and then the two closest scores would determine your essay grade.

So, for example, if one of the readers gave your essay a 4-score while the other reader rewarded it with a 3-score, your essay score was 7.

Passing the five HiSET subject tests and earning a high school equivalency diploma are great achievements! This is truly an important step towards a brighter future as your diploma allows for better job options and a college education.

However, the HiSET, like the TASC, is a rather challenging exam, and the passing standards are set at such a level that some 40 percent of high school graduates would not pass the exam on their first try.

So getting optimally prepared is crucial and taking practice tests (available for free on this website) lets you discover your stronger and weaker points so you can center fully on those areas that require most of your study time.