The GED test is an exam for students who didn’t finish high school. If students pass 4 subject tests, they receive a High School Equivalency Diploma issued by their state.

This document has the same value as a regular high school diploma and allows students to apply to college, get jobs that require a high school education, get financial aid in college, etc.

If you want to sit for the four GED® modules (independent subtests), you’ll have to set up an account on the website GED.com/MyGED, the official website of the GED publisher, GED Testing Service.

Throughout the nation, you can find numerous GED testing centers operated by adult education centers and colleges and universities. The GED exam can be taken at these test centers or in an online proctored (O.P.) format.

GED Testing Service is a joint venture of Pearson VUE, one of the world’s leading education publishing companies, and the American Council on Education (ACE), a nonprofit organization that published the GED exam for more than seven decades.

The GED exam includes four subject tests that are aligned with the National Common Core Standards. Currently, there are two ways to take the GED test, online and at state-designated test dedicated centers.

The Online Proctored (OP) test is quite popular but has a bit different requirements.

Through the years, the GED exam has been going through several versions and revisions because educational needs had evolved with a changing society.

Throughout all these changes, the GED exam has remained an essential avenue for anyone who couldn’t finish high school.

This timeline indicates the dates of new versions of the GED test and the reasons for changes. 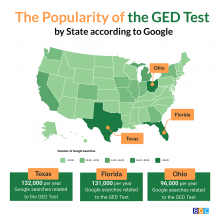 Equivalent to a high school diploma, the GED certificate opens many doors one may have thought were closed forever, and holding a GED will surely lead to better earnings.

First developed in 1942, the test was a direct reflection of an industrial era, during which time a high school education was adequate for many jobs.

The GED was developed to help military vets with their transition into post-war society! The test gave individuals that had enrolled in the armed forces before graduating from high school a great way to demonstrate their skills and knowledge. After passing the GED exam, military veterans could get a good job again or continue their education in college.

In 1947, New York was the first U.S. state to extend GED testing to non-veterans as well, and in 1974, it appeared that all 50 U.S. states had followed New York’s example.

By 1970, practically all 50 U.S. states had started to use the GED program for high school equivalency testing, and over forty percent of all GED test-takers claimed their primary motivation to do so was obtaining a job.

As the industrial age came to a close, changes in secondary education made reviewing the GED necessary. Check here to learn what you can do with a GED.

1988-Popularity of the GED test grows

By the early 1980s, almost 15% of all high school qualifications were GED diplomas.

As the industrial era ended, a more information-based, technological shift occurred, and this evolution necessitated another GED overhaul.

With this shift, test takers’ reasons for taking the test also changed, with a higher percentage citing a desire to enter postsecondary education (65%) than for strictly employment reasons (35%).

More than 65% of GED candidates said they plan to attain postsecondary education to get a better job or a good position in high-demand sectors.

This revision included more business-related topics to keep abreast of an evolving job market. It also increased the relevancy of reading passages, thus making them more adult-friendly and pertinent to the times.

The GED test is now computer-based. It measures problem-solving and critical-thinking skills and prepares students for a career, not just a job. For more information about the GED exam, check out this page.

The current manifestation of the test itself was developed and administered by Pearson after the company merged with ACE in 2011.

ACE wanted to overhaul the test but realized that the approximate $40-50 million overhaul was not feasible by itself, so it sought a partner, and Pearson was the only company that agreed to partner with ACE for this huge endeavor.

This version was created to align with the Common Core Standards to better prepare students for post-secondary education and an evolving job market.

Thus, the test is now strictly computer-based with questions that utilize drag-type of questions, multiple-choice, fill-in-the-blank, extended- and short-response questions, which complement the increasing focus on computers.

The test itself evolved from being purely academic to containing more practical applications.

Consequently, the test’s difficulty level increased to stay abreast of an evolving society and workforce.

To address this, back in 2016, GED Testing Service lowered the GED passing score from 150 to 145 per subject.

Before this adjustment, the average scores among those who passed the exam were 150 for math, 152 for reading/language, 153 for social studies, and 154 for science.

This adjustment was a direct result of research that demonstrated that individuals who passed the newest GED test were doing better in college than more traditional high school graduates and not due to the arguments that the test was, indeed, more difficult.

In addition to the lower cutoff score, the GED now utilizes tiered pass rates, which assess whether a successful test-taker may be college-ready without any remediation and who may be eligible for college credit through ACE’s Credit Recommendation Service.

The GED test will likely continue to evolve as secondary education evolves.

Since 1942—the year the GED test was first created — almost 20 million individuals have obtained their high school equivalency credentials.

Nearly 70.2% of test-takers completed the entire test, and of those, 85.3% passed and received their credentials.

Overall, however, the passing rate for all test takers—whether or not they completed all four areas—was 59.9%. But again, if we look at the number of students that completed the GED subtests, that percentage is considerably higher.