Many students who had not passed the GED exam from January 1, 2014, until January 1, 2016, received their credentials retroactively.

GED Testing Services has decided a few years back (in early 2016) to lower the score needed to pass the GED tests.

With Online GED Classes from Onsego, getting your GED is not hard. Let us help you. Learn More.

The reason was that in many states GED graduates outperformed regular high school graduates in college.

So, the required scoring standards were set too high in comparison to high school graduation standards.

The four independent tests were not changed; only the score students need to reach to pass the tests were lowered.

GED test students are required to score at a level that can be expected of graduating high school students.

Onsego GED Prep is a fast and easy way of getting the GED Diploma. We highly recommend it. Learn more
Marie from Best GED Classes

However, research had shown that GED test applicants were studying to score at a higher level than high school students, so the required score could be lowered to 145 points.

GED test officials say that when the high school levels of performance go up, they will adjust the required GED test scores again and that they will continue to ensure that GED test graduates hold the same standards as regular high school graduates.

For now, this means that GED test-takers pass the GED tests if they reach the 145 points mark.

Retroactively, this meant in 2016 that thousands of disappointed GED test applicants who failed by just a few points over the years 2014 and 2015 learned that they had earned their GED diplomas anyway.

That was Great News. This video explains more about this important move:

This change in scoring requirements happened after two years of experience with the latest edition of the now totally computer-based GED exam.

What’s also changed that if you fail a subtest, you’ll have two retakes at reduced rates as long as you complete this within one year.

A few years ago, GED Testing Services rolled out a far more rigorous version of the GED exam to guarantee that graduates met college and job market expectations and requirements, and the price tag became considerably higher as well.

So when the testing requirements were lowered, expectations were that more people register for the test and that more students will pass.

This website offers additional help for GED test applicants in the form of free GED video lessons and practice tests.

Studies have shown that video instruction is a highly efficient way to get all set to take the four tests successfully. 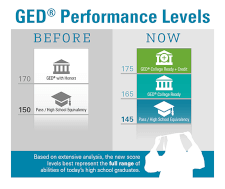 The four GED tests are independent modules, meaning that they may be taken separately. The four testing subject fields are Science, Social Studies, Math (Mathematical Reasoning), and Literacy (Reasoning through Language Arts).

Check out also this post where you can find all GED prep locations and testing centers across America, also your area.

The GED modules must be taken entirely on a computer. Though initially, there were some concerns regarding only computer-based testing, this choice makes sense.

In the contemporary workplace, there’s hardly a position anymore that does not call for basic computer and/or keyboarding skills. So, obviously, GED graduates should also be, at least to some extent, computer-savvy.

BestGEDClasses.org is an informational website about preparation for the GED test. GED® is a registered trademark of the American Council on Education which is not affiliated with this website.