A baccalaureate degree is a bachelor’s degree from a college or university. The word has other meanings around the world, such as in France, where it refers to a diploma from a secondary school.

In the United States, though, and in more parts of the world, baccalaureate refers to the degree that a student receives after passing the equivalent of four years of college courses.

This is usually around 120 credit hours of study. A baccalaureate degree is the first degree received.

It is also sometimes called an undergraduate degree. Continue reading to learn everything you need to know about this all-important degree.

B.A. degrees and B.S. degrees have many of the same required courses, but as the student moves into the third and fourth years of college, the B.A. student may focus more on higher-level literature, language, humanities, history, social science, and other coursework.

The B.S. student will probably focus more on higher-level science and math. One baccalaureate degree is not considered better than the other; they are simply different.

GED® holders qualify for a college education. The GED credential is all over North America accepted in lieu of a common high school diploma by academic institutions and employers.

So also GED graduates can earn a bachelor’s degree and continue their academic education and have a great career in so many fields.

Keep in mind that GED test-takers that attain scores in the GED College-Ready and College-Ready Plus Credit ranges may have SAT/ACT requirements waived.

GED College-Ready scores will also benefit students in a way that, to get admitted into college or university, they usually won’t have to complete any remedial programs.

GED students with this sort of high score often don’t have to meet any other prerequisites (all depending on the school, of course). Check here to learn more about how the GED exam is scored.

An ever-increasing number of colleges and universities are accepting the GED College-Ready scores, a great development that indicates how the GED program has evolved into a true high school equivalency assessment!

The benefits of having a baccalaureate-level degree are that the student has demonstrated that they have a college-level course background in a specialty area. You understand that this a major achievement in a person’s life.

A writer with a B.A. in English should know more about language and literature than an engineer who has a B.S. in Engineering.

Both students completed the same lower-level courses, but as they began to specialize in their academic studies, each one branched out to take advanced courses in their field of interest.

Holding a baccalaureate degree (bachelor’s) usually brings credibility and respect to the graduate. An increasingly popular bachelor’s degree is in American Sign Language (ASL). This may not come as a surprise as today, at practically all broadcasted press conferences, we can see an interpreter translate the information into ASL. 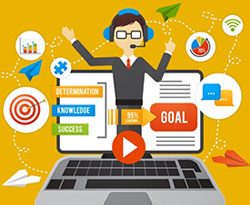 Holders of a bachelor’s degree have attained a knowledge level that most people don’t have, and this means that they, in general, can acquire positions that require an extensive level of knowledge about a subject.

As an example, people with a high school diploma that graduated from the 12-grade may be expected to have some level of proficiency in world history, right?

Someone holding a B.A. in History, however, will know a lot more about world events and people. If a student has completed all the bachelor’s degree-academic courses, s/he will also be able to become a teacher at the secondary school level.

A degree that’s currently in very high demand is the B.A. degree in Business Administration. Graduates from Business Administration programs qualify for top positions in many areas of business, not only in management positions. The degree qualifies students to work in corporations, banks, hospitals, and lots of other businesses.

This professional field can be very attractive for persons who like to deal with numbers and who like to work alone and independently a lot. Read also this review of Keystone Online High School, a school that’s known for delivering students that know what it takes to learn independently.

Sure, studying comes at a cost, but you really should try not to let your financial burden get out of hand. Your GED allows for attending community college which is usually far cheaper than 4-year colleges and universities.

What’s also in high demand are degrees in Engineering. This professional field is actually among the highest-in-demand job sectors across North America!

Today, and that goes without saying, Computer Engineers are in high demand as well. They are the specialists that keep our automated network systems running smoothly and also engage in so many other aspects of the world of technology.

These professionals often work as computer scientists or network systems administrators, but there are more interesting job openings that online high schools such as, for example, James Madison High School, offer targeted education for.

Top-quality academic education remains a concern, though, for many students, especially when we consider the declining level of some elements of the educational system in so many parts of the nation.

Earning a baccalaureate degree requires completing all the required academic courses for a specific degree and/or specialization and attaining minimum grades or better.

In general, we can say that college graduates may be expected to command extensive general knowledge in the fields of math, language, history, science, philosophy, and many other fundamental areas.

Additionally, college degree holders have completed specialized, intensive academic courses that have taught them so much much more than what the general public understands about those fields.

Upon graduation, students who attained honors-level achievements usually are the first to get hired. So all students should really try to maintain the highest grades possible all through their years in university or college to land the best possible position.