Some states (for example, Illinois and Arizona) require GED test-takers to additionally take and pass the United States and state constitutions test.

And in North Dakota and Wisconsin, just to mention a few states, GED hopefuls must additionally pass a Civics Exam. More states are listed below.

To be successful on the GED® Constitution test, test-takers must command the primary documents that are covered by the test.

Additionally, they must be able to indicate the functions and roles of various elected officials.

What do we call a government run by the people, either indirectly or directly?

How to Prepare For The Constitution Test

This website offers numerous free online GED video lessons (including transcripts) and lots of free GED practice tests. Video lessons are known to be highly effective and will get you all set for the real thing fast and efficiently.

Taking our free practice tests will allow you to discover which GED subject areas need your attention and study time most so you won’t have to waste your time on things you already know.

Part two covers the U.S. Constitution and its Outline; How and when the Constitution was written; The Federal System and the Separation of Powers; Article I: The Legislative Branch and How a Bill Becomes a Law; Article II: The Executive Branch; Article III: The Judicial Branch; Checks and Balances; Articles IV-VII; The Amendments.

Part three of the Illinois Constitution Test covers the U.S. Flag and Displaying the Flag.

The U.S. Constitution has three parts. The first part is a 1-sentence introduction referred to as the Preamble. This Preamble doesn’t contain any laws, but it restates Thomas Jefferson’s main idea for the U’S’ Declaration of Independence. 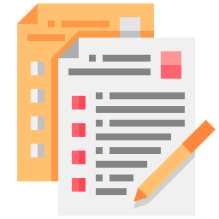 The Preamble is emphasizing that the power of governing and government is derived from the American people. The government, rather than being the master of the people, is to be the servant of the people.

The 2nd part of the U.S. Constitution contains 7 separate articles that all give the plan for a specific part of the government:

This Bill of Rights became effective on December 15th, 1791, and the amendments are guaranteeing personal freedoms to all Americans. Since the Bill of Rights was added, 17 more amendments were added to the U.S. Constitution. For all GED prep locations in Illinois, go to this page.

The U.S. and Illinois State Constitution and Flag Test

Let’s consider the situation in Illinois. To earn your High School Equivalency Diploma in Illinois, on top of completing one of the two available HSE (high school equivalency) exams (GED®, HiSET®), you also have to take and pass the U.S. and Illinois Constitution Test. Check here for information on the newly introduced online GED test, and for information about the HiSET exam, check out the online HiSET exam.

The U.S. and Illinois Constitution Test is officially called the United States and Illinois State Constitution and Flag Test. The test assesses to what extent Illinois residents can answer questions related to American patriotism and the principles and organization of representative government.

This test is free and may be taken at any time. The test covers your knowledge in subject fields related to the United States Constitution, the Declaration of Independence, the U.S. flag, and the state of Illinois Constitution.

If you prepare, you’ll be able to take the Constitution Test successfully, just like you will have to get optimally prepared to attain sufficient scores on the four independent GED subtests. Instruction is generally offered by ABE (Adult Basic Education) facilities, adult schools, and community colleges.

GED students that already passed this high school level Constitution Test do not have to sit for it again. Just provide proof that you took and passed it to your Regional Office of Education at the time you’re requesting your HSE (High School Equivalency) Diploma.

Before students can graduate from their public high schools, many states require students to take and pass a Civics Test. Not all of these states have the same requirements for GED test-takers, though! Usually, this Civics Test is identical to the American (USCIS) Naturalization Exam.