So let’s start with the first type, finding a given percent of a given number.

1. Finding a Given Percent of a Given Number

Let’s start with our first type of percent word problem.

As an example: What number represents 25 percent of 640?

Here is our Solution:

x represents our unknown number. So we translate our words into a simple equation.

Online GED classes from Onsego.  Simple, Fast & Easy.
Get Onsego and pass your GED this year.

So we have to solve this equation for x.

2. Finding a Percent when We’re Given Two Numbers

Next, let’s take a closer look at the 2nd type of percent problem.

Well, let x represent our unknown percent. Then we can translate these words (15 is which percent of 50) into the following equation”

But notice that we have to express the answer as a percent. To get a percent, we’ll simply have to move our decimal 2 places to the right (and, of course, add the percent symbol).

3. Finding a Number which is a Given Percent of some other Number 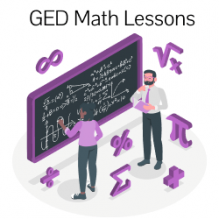 Now, let’s look at the third item on our list of basic types of percent problems that we started this page with.

For the solution, we say that x represents our unknown number. So we can translate our words into the following equation.

And now, we’ll be able to solve the equation for x.

When we multiply both sides of the equation by 10 we get: