Sign Language is becoming increasingly popular and there are more and more colleges that accept ASL (American Sign Language) as a foreign language.

American Sign Language, or ASL, is a distinct and fully developed language that has, among others, its own unique grammar.

Today, at practically all television news programs, we can see somebody translating the messages into ASL. That’s an interesting development, right?

It’s not only that many colleges accept ASL as a foreign language, but your GED® diploma also allows you to go to college and study for a bachelor’s or master’s degree in ASL.

The fact of the matter is that more and more colleges and universities across the U.S. offer ASL programs.

This article’s purpose is to provide information and resources on American Sign Language to individuals who take an interest in studying the language, to persons who want to learn more interesting facts about ASL, and to people who are already engaged in ASL education, either as a student or as a teacher.

We understand that the topic of American Sign Language has an inherent relationship with many subjects of Deaf culture and deafness, and this post provides primary information related to ASL itself, while it offers only very limited information about other issues that are surrounding the world of deafness.

ASL is distinct from English or any other foreign language and distinct from other sign systems as well, both foreign-based and English-based.

Over recent decades, quite a few states passed legislation to recognize and identify ASL as a distinct foreign language.

This enabled universities, colleges, and high schools not only to accept but also to implement the language, therefore fulfilling all requirements regarding foreign languages with regard to hard hearing and deaf students.

American Sign Language is a visual/gestural language that is distinct from English or any other foreign spoken language.

As stated above, if you pass the GED test, you can go to college, and if you score in the college-ready range (165-200), you may have SAT/ACT or other requirements waived! If you don’t have a GED yet, take online GED classes and pass the GED test quickly.

We don’t know the exact number of people that use ASL, but the language is the most widely used language in the U.S. for one-on-one communication.

ASL is used as a 1st or 2nd language by many Americans and estimates range from 200,000 to nearly one million individuals, including deaf native signers, children of deaf parents, and/or adult deaf signers that learned ASL from other deaf individuals.

ASL is a fully developed and distinct language with its own one-of-a-kind grammar. As said above, the language is distinct from the English Language and also is distinct from sign systems, both English-based and foreign-based.

During the past decades, ASL education has been experiencing increased enrollment because more and more individuals have become interested in learning the language.

Studying ASL doesn’t require more effort than any other subject, but good study habits will help you deal with the entire curriculum in a timely manner, as it does with earning your GED diploma.

Over the past decades, quite a few states have passed legislation to recognize American Sign Language as a foreign language.

This enabled high schools, universities, and colleges to accept ASL in foreign language requirements fulfillment for both deaf and hard-hearing students.

By the last turn of the century, almost 30 states had passed relevant legislation, and numerous universities and community colleges, including Georgetown, Brown, MIT (The Massachusetts Institute of Technology), the University of Washington, and Purdue, are accepting American Sign Language as a distinct foreign language.

These days, when you’re watching any police reporting, there is practically always someone present who will interpret the given information into American Sign Language.

So also, when you’re considering joining the Police Force, ASL knowledge may open up more and more career opportunities.

After earning a college degree and having considerable experience, ASL students may even study further to earn an MBA degree and use their knowledge on a broader platform. Check here to learn more about earning a bachelor’s degree from an American college or university.

List of universities that are accepting ASL as a foreign language

About the list: The list began some 20 years ago and was published by Sherman Wilcox from the University of New Mexico. We think it’s the most actual list so far. 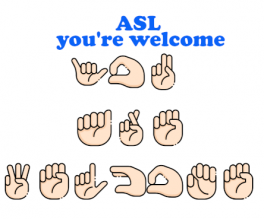 and it’s also worth mentioning: the website deafalphabet.com that allows you to convert text into sign language. You can then share them with anyone by downloading an image of your translation.

Let’s look at a few questions that are often asked when it comes to ASL:

Is ASL a language?

Well, ASL is a fully developed, distinct language. ASL is just one of the world’s several hundreds of natural signed languages, including a complex grammatical structure.

ASL is US-based. How can it be a foreign language?

ASL is a language that’s indigenous to the U.S. and parts of our northern neighbor Canada. In the academic world, however, the place of origin of a language has little or nothing to do with whether it’s considered a foreign language.

To give you an example, Navajo and other American Indian languages are all across America accepted in fulfillment of foreign language requirements by numerous colleges and universities.

Is there much ASL literature?

There is an extensive writing system for ASL, but none of these systems are used on a large scale for recording ASL literature.

Another excellent source of information on the folklore and heritage of Deaf people is available at the bookstore of Gallaudet University in Washington, DC.

Is learning ASL easier than other foreign languages?

American Sign Language (ASL) comes with a more complex classifier system and verbal aspect than English or other foreign languages.

Many ASL students feel it is more difficult and complex to learn than other oral languages.