We require a common language if we want to communicate mathematical concepts and ideas efficiently and clearly.

One example is Exponential Notation. This was developed to clearly express repeated multiplications and to simplify long numbers.

This lesson is provided by Onsego GED Prep.

Next lesson: Order of Operations with exponents
This lesson is a part of our GED Math Study Guide.

As an example, often, exponents are used in growth models for demographics and populations to manipulate and manage large numbers that are changing quickly over time.

So when we want to work with exponents efficiently, we should “speak that language” and get known with some rules first.

So what exactly is Exponential Notation?

Well, exponential notation consists of two parts. First, we have a base. As the name already suggests, this is the number found on the bottom.

So now we understand what 103 is meaning, but how are we pronouncing this? We have quite a few choices. The term could be pronounced as “ten (10) raised to the 3rd power” or “ten (10) to the 3rd,” or “ten (10) cubed.” The phrase “raised to a power” is inserted between our base and our exponent for the indication of exponential notation.

Now to the term -34. Well, this example may be a bit trickier because of the negative sign. One of the exponential notation rules is that exponents relate only to the values immediately to the left.

You see, that’s a huge difference.

Rules for Computing with Exponents

We’ve just learned that exponents only relate to numbers directly to their left unless we use parentheses. Here’s one more rule: when exponents are present outside parentheses, everything inside must be raised to that power. Let’s look at an example:

Do you see that this works out to five (5) multiplied eight (8) times? Another way to write this is 58.

So we can simplify the power to power by multiplying the exponents while keeping our base the same. We also have this rule if we want to combine two numbers in exponential notation that have identical bases. Look at the following expression:

You may notice that seven (7) is the sum of our original two exponents three (3) and four (4). So if we want to multiply exponential terms that have identical bases, just add the exponents.

Exponents apply only to the values to the immediate left.

When quantities in parentheses are raised to a power, exponents apply to everything inside those parentheses. 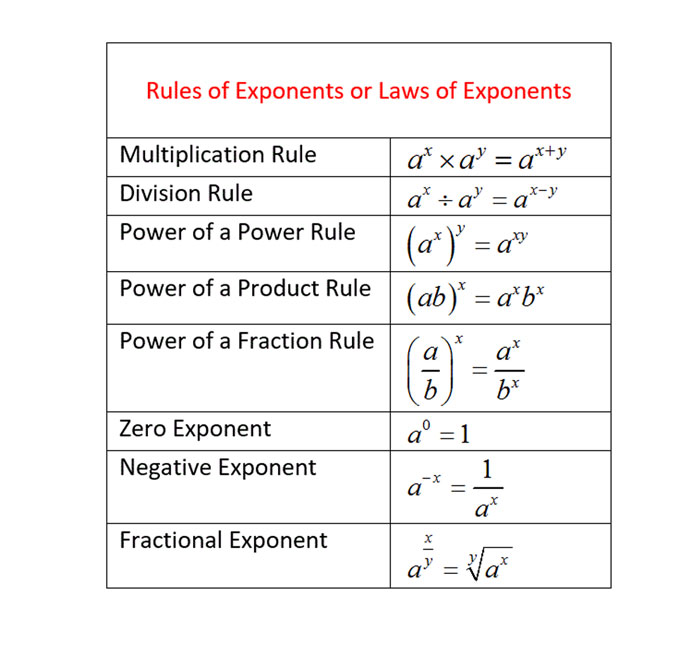